Learn about all the momentous occasions the couple has shared since their days at St. Andrew’s studying Art History. Kate Middleton and Prince William on their graduation day from the University of St Andrews in June 2005, where they met and fell in love. Getty/Reuters Excluding a brief split in 2007, the couple had been dating for eight years when Prince William proposed while on holiday in Kenya in October, 2010.

“I regularly daydream. Africa is definitely one of the places I go to. It does completely settle me down. [Kate] understands what it means to me being in Africa, and my love of conservation,” William said. ‘I didn’t really plan it that far in advance. I just knew I wanted it to feel comfortable where I did it.”

Prince William presented Kate with his mother’s own engagement ring—a 12-carat Ceylon sapphire surrounded by 14 round diamonds that Princess Diana had picked out from court jeweller Garrard before her own fairy-tale wedding to Prince Charles. 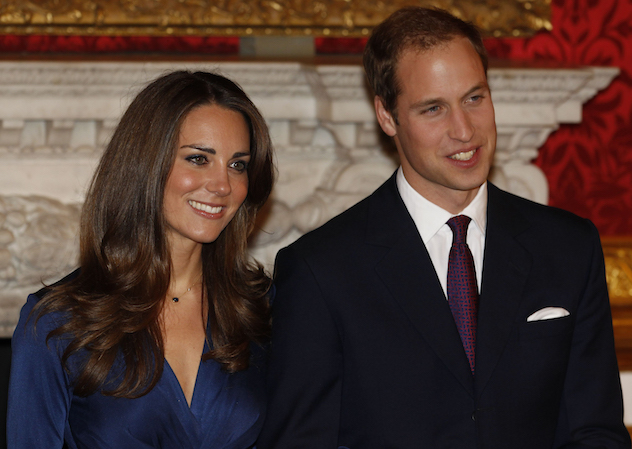 Held at Westminster Abbey on April 29, 2011, the wedding was watched around the world by millions.

The couple included several tributes to Prince William’s mother, Princess Diana including the hymn “Guide Me, O Thou Great Redeemer”—which was the final selection sung at Diana’s funeral. Britain’s Prince William stands at the altar with his bride, Kate Middleton, and her father Michael, during their wedding at Westminster Abbey in central London. REUTERS/POOL New The Duke and Duchess of Cambridge share a kiss on the balcony at Buckingham Palace.

For their first official royal engagement as a married couple, the Duke and Duchess of Cambridge welcomed then-US president Barack Obama and wife Michelle to Buckingham Palace. Prince George is born on July 22, 2013 and becomes third in line to inherit the British throne, after his grandfather Prince Charles and father Prince William.

The Duke and Duchess of Cambridge outside St. Mary’s London with newborn Prince George The Duke and Duchess of Cambridge visit the Sensational Butterflies exhibition at the Natural History Museum with their son Prince George. London, July 2, 2014. REUTERS/John Stillwell

The family kicked off a three-week royal tour with a ceremonial welcoming in Wellington, New Zealand which culminated in the ANZAC Day march and commemorative service in Canberra, Australia. Kate and Will pose for a photo with former Australian prime minister Tony Abbott and Manly Lord Mayor Jean Hay standing next to a surfboard that the local council presented as a gift for the royal couple’s son, Prince George (REUTERS/David Gray ) William and Catherine laugh as they take a jet-boat ride on the Shotover River in Queenstown, New Zealand.

Princess Charlotte was born on May 2, 2015. The first daughter of the Duke and Duchess is fourth in the line of succession to the British throne. William and Catherine appear with their baby daughter outside the Lindo Wing of St Mary’s Hospital in London with newborn Princess Charlotte in 2015. Princess Charlotte sleeps as she is carried in a car seat from the Lindo Wing of St Mary’s Hospital, in London, Britain May 2, 2015.

Princess Charlotte took her first steps in public on an eight-day trip to Canada. William and Kate are determined their children grow up in private and not in public, so this public outing was a rare occurrence. Prince Louis was born at 11:01am on April 23, 2018. Prince George and Princess Charlotte were the first visitors to St. Mary’s Hospital with their father to meet the new baby. The Duke and Duchess of Cambridge leave St Mary’s Hospital with their new baby boy in London, April 23, 2018. REUTERS/Henry Nicholls

The first day of school can be daunting for young ones, but four-year-old Princess Charlotte had her big brother George right beside her to show her the way. Check out all the pictures from her big day here. The birth of Archie Mountbatten-Windsor, son of Prince Harry and Meghan, meant a new cousin for Princes George and Louis and Princess Charlotte, who were seen together at a charity polo event in 2019. The Duke and Duchess of Cambridge invited the Queen to have a look around the Duchess’ ‘Back to Nature’ garden, which she designed. Take a look at the inspiration for the garden as the Duchess showed the Queen around. Queen Elizabeth II is shown around ‘Back to Nature’ by Prince William and Kate at the Chelsea Flower Show in London, Britain May 20, 2019. Photo Credit: Geoff Pugh/Pool via REUTERS

With the spread of Covid-19 around the world, and particularly in the United Kingdom, the much-loved Royal Family all wore NHS blue as they led the fifth week of Clap for Carers – as millions of Britons saluted key workers from their doorsteps. Click here for the video.